Good day had by all - met with good pals on two occaisions, weeny had excellent time dressing up as a witch - met little chums in the market square in Alnwick and went ont he spooky bus twice. Didn't win the  best witch and wizard competition but got a toffee apple anyway. She looked acce and has had her pic taken for the local rag - out on Thursday - will post pics as they are in the public domain anyway!

Poor Biggles put his iphone clock back last night then the phone reset itself by a further hour. Big whoopsy. He is officer in charge this weekend so was late for work by 45 mins. Not good in the millitary.......ever. Am sure they will also take the proverbial big time however the invasion hasn't happen but still a big no no. He gets very stressed when this happpens - RAF is very important to him. He as a mill type does get stressed with things like this. Bless him. We were both up and pointed out the time to him by checking the telly then got out of the way as he went into hyperdrive finding keys - didn't even have time to drink his tea. I hate it when you are late puts you on a catch up for the rest of the day.

I am anxious - weeny starts big school tomorrow ( nursery school she thinks its big school)  Early drop off with a new childcare provider. I shall hardly ever see her teacher unless the plan comes together..............


I have a plan involving social housing if I can get it.... I see the homelessness officer on Tuesday. If so may be able to reduce working hours to four days per week. I would really like to to do this so that I see more of Weeny who turns four in January before she begins first school and this wold also give me access to her teacher once a week- ideally Fridays!

I can't afford it if I rent privately. If I rented privately I would be in a flat and thats a bit pants with a small child. She likes to play on her bike.


Also have Christmas practically in the bag!  Thanks to commerce of the ebay kind, the selling bags of old clothes kind and gold with some pennies left over. 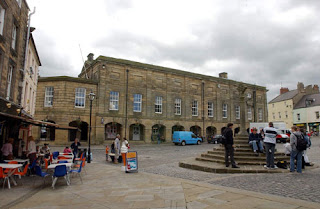 Market square in Alnwick. The town I live in is rather nice.
Posted by Eeek at 30.10.11