Explanation and I hope I have the right person!

Posts in context!!!!   Point to note in bold, my comments in red!
Anonymous1 November 2012 17:11
Why is it that people automatically assume "anonymous" commenters are trolls?

In this great wide world of internet blogging who knows whether someone puts their own name or not and if you're not giving your real name you might as well be "anonymous" too.

People criticise others for being critical yet they're doing the very same thing that the original commenter does. ( Yeah but some critisism is put in a nice way others - constructive and plesantly put. Sometimes I worry that not turning the heating on my have implications for my health, slips and trips and falls would be catastrophic especially if you are a walker and hiker. Please take care  using the slippers for eg)

I think anyone who is happy to show the world that they dress up in such a way to combat the cold and admit to eating out of pans must accept that they lay themselves open to some criticism. ( constructive or maybe politely put questions but not put downs)

Eating out of pans is seen to be uncouth. I don't do it, I was brought up to have impeccable table manners and to act otherwise would be an affront to my parents. Does it take more washing up liquid and hot water to wash up a plate with the pan? I don't think it does. I think a hint of laziness creeps in when you can't be bothered to use a plate.


Only my opinions - other commenters are free to have theirs.

I comment under "anonymous" as I don't have a blog or google account or any of the other things listed to comment under.
Tom, Dick or Harry (who knows and does it really matter?)
Eeek1 November 2012 19:15 Please note time and date.
Tom Dick or Harry. I think you are a tosser. I am uncouth and could star in Shameless as is on the telly. I also pick my nose scratch my arse and fart. You being couth do none of the above. I don't care how many paper doilies you have or nylon plastic doll wearing a big frock toilet roll covers. Good for you Hyacinth! Live and let live. UNLESS YOU ARE UNCOUTH LIKE ME AND I WILL CALL YOU A TWAT TO YOUR FACE. Shorts and wipes snot on her sleeve. I eat out of pans in public. I love a good trough! Ilona puts on her manners out of the house. She even sticks out her pinky when drinking tea. I hope your finger pokes through the toilet roll next time. You clearly spend a lot of time doing this as your full of it! Ha ha Sorry ilona great to get it off my chest lol
Christine: I point out that I am being Uncouth and demonstrating exactly what it entails
Anonymous2 November 2012 17:09  Please note time and date.
all this makes me hoot with laughter. No one has truly read the original string of comments. Quite a number of commentators kindly hinted that the taped slippers were dangerous - I also meant Illona would be frozen to the core if she unfortunately ended up in hospital if she slipped, as she could be lay in a cold house until help arrived - not that hospitals weren't heated. But people read what they want to read. Nowehre did I suggest that Illona wasn't kind, happy or fulfilled, but I can see the ambulance mens/womens expressions when they entered the kitchen full of boys pants drying on every kitchen knob. Trust me, I've helped deal with and empty some sad homes along the years. ( How condescending and patronizing is this!!! and clearly you haven't as I have seen worse that this as a professional working with young people)
BTW, I lead a lovely frugal life and retired at 53 as I was debt free and I had helped my daughter train to be a midwife then a health visitor. My days are happy and fulfilled - I have a rescue dog and 3 rescue rabbits abandoned on the side of the road and local hillsides. I just don't choose to eat from a pan. end of.
And the point of helping your daughter through uni is??? Does this make anna a saint?? Errr no. What is she implying by including this???

Anna
Reply one not using the reply directly box!!!! note the time!!!
Eeek 2 November 2012 23:27
Anna Anon. There are far worse homes out there that social and emergency services have to enter. I doubt they would be shocked by boys pants clean washed ones hanging up. Plenty environmentally conscious folk use grey water and are frugal with heating and food. Your uncouth comment was rude. In the privacy of your own home you can do as you like no need for you share your opinion in that manner. Hmm busy body comes to mind telling the world how to live. I can be rude too and more uncouth than you can imagine. Take care now. Night y`all
ReplyDelete
Reply two on discovering the reply box - mulling things over and getting angry now. I have a slow burn!13mins later! Am a bit slow and moronic! There's more proof- see!!!! ;-)

Christine: I am assuming you are the same one as listed on my followers. If not I most humbly apologise.
You do not blog which I find kind of creepy yet  have been about for a while. For some its voyeuristic! Not all though!!! I was a voyeur too for a while. You don't get the way I write.
Guess what I love Frankie Boyle!  Just go. Its for the best.
Remember I do not write for an audience. I write for the process. Whether there is an audiencce or not is irrelevant. Nice to get pearls of wisdom every so often but  I manage in the real world with real people too!. Please see previous post also on why I write to know that followers are also appreciated.


And err the Weaning Wean and Sue can go boil heads as well. Funnily enough I would be exactly the same in the real world and would shamelessly be scathing and nasty blah de blah blah blah. Anyhoo!
Much love I have a floor to wash and sunday frugal dinner to make!
Eeek! Bloodybuggerfuckertyfuckfucktosserwankbollockystwatpiss!
Posted by Eeek at 4.11.12 3 comments: 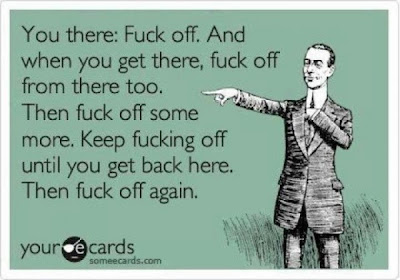 Postcards from the edge....

Turn back all yee you are educated and sophisticated for fear of insult and offence!
You will find here, along with some uncouth stuff other bits of stuff I like and find amusing, I think is important or that  makes  me snigger. And yes swearing does figure, along with politics, equal opps, banksy, pre raphelites, religion.... C'mon  dare ya! 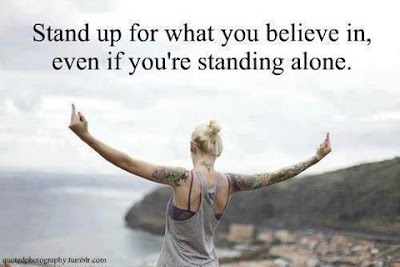 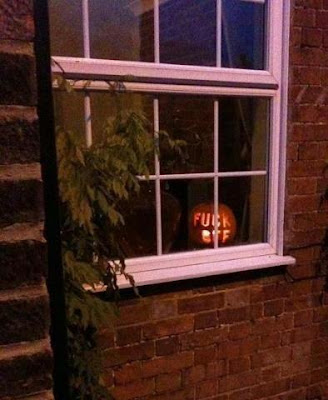 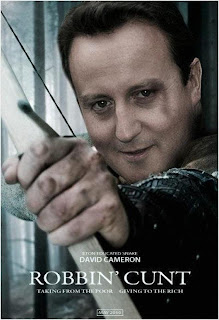 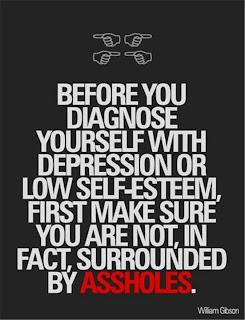 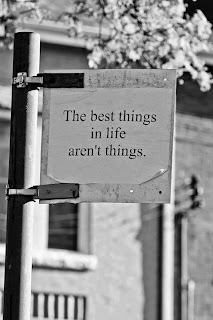 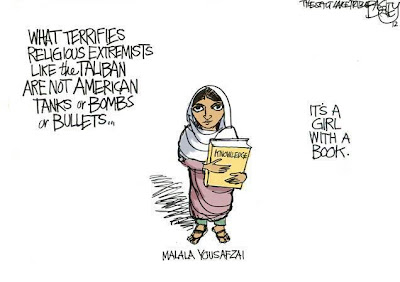 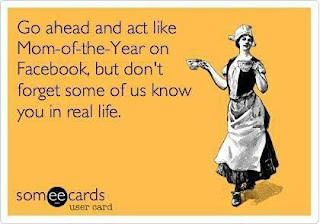 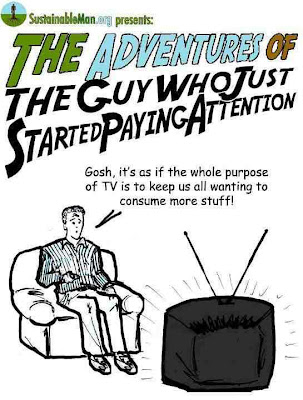 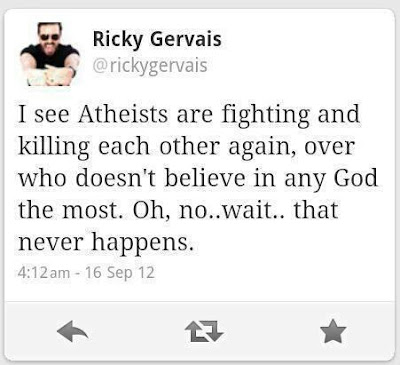 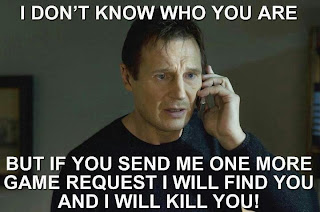 From Taken - not a bad movie for an action shoot em up! 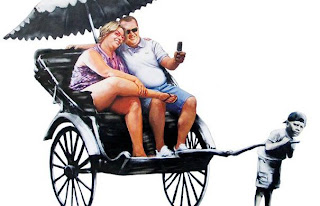 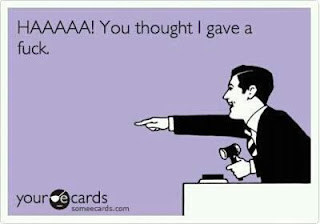 I do give a fuck about somethings - see the Banksy above! 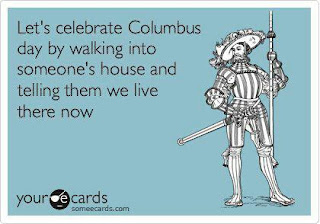 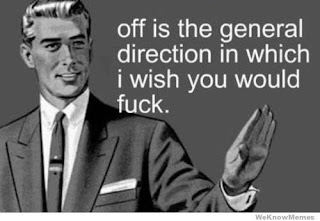 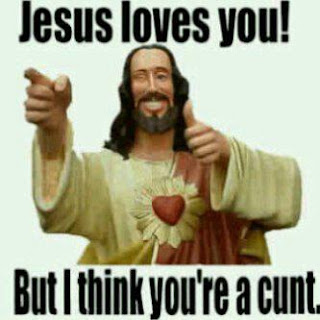 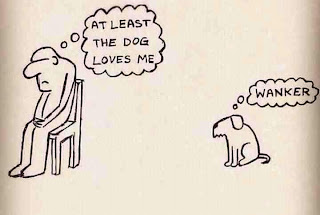 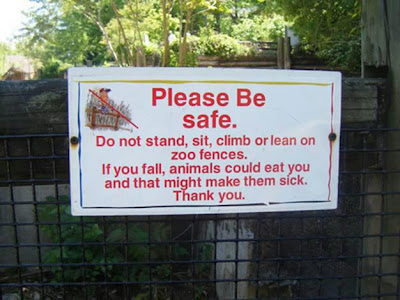 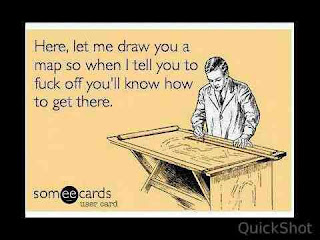 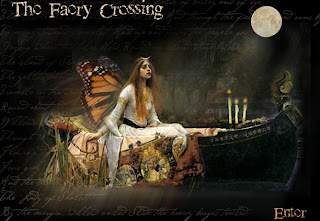 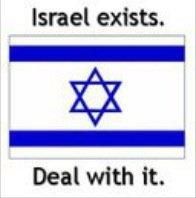 This is my secret right wing issue- we all have a failing! 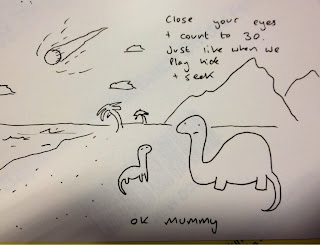 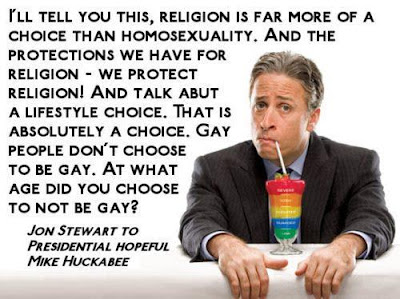 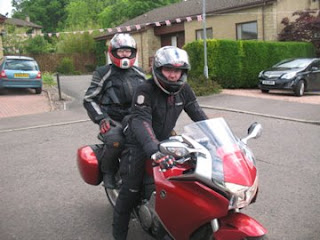 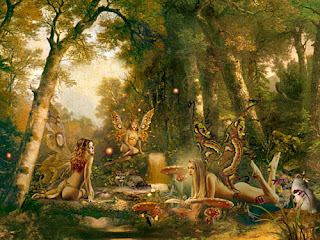