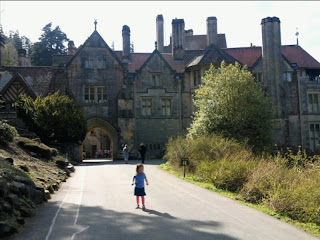 We were off and out and at em again this morning-  after making bolognese for tonight's lasagne, armed with a picnic, camping stove and this time matches for the making of  a decent cup of tea.! Biggles was off training for his sponsored motorbike ride (visiting a number of RAF bases around the country in a set number of days)- build up hours spent on bike or you get severe numb bum and tiredness as riding take a lot of concentration especially on new roads of the A and B variety. Weeny girl and I tootled off again to visit a local stately home and estate. First time I have ever been - always been too tight to pay £16+ entry fee.  Though you could easily spend the day there in good weather - you drive or walk around the estate on a one way road - a circuit with car parks which lead off to places of interest - waterfall, lakes. play area, labyrinth, country house, formal gardens, iren bridge, clock tower, picturesque picnic spots, forest walks.... 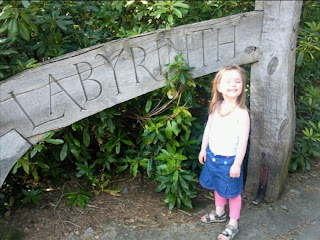 We took in the most relevant places to a three year old - despite driving round  she was getting tired after a couple of hours hard marching here and their- the estate is huge and you would need to walk well to get round it in a day. The only spend was on the ice cream - £3.60 for two and a can of diet coke for incredibly thirsty mummy. Eeeek!!!! prices!!!! 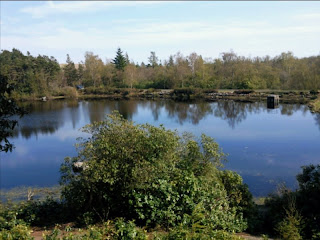 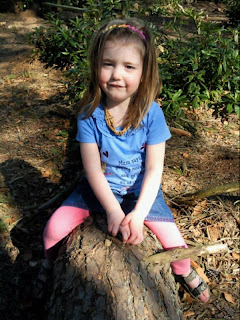 Called in to Messy Church  at 4pm- was referred by  the Debt Christians and I happpen to know the person they referred me to so I felt I had to turn up at some point. It was actually not bad - very child friendly and more of a  Sunday school with songs, games, craft activities and also tea!!! Yes the kids and adults get a sandwich tea! Not bad and more than enough to full your tum if you don't have plans for lasagne! Weeny girl happy as pig in muck! Seen  her chums and had a good play with other small ones  with some God thrown in for good measure. Its not a weekly thing but every so often - next one not till  8th May - I may go back- will see what we are doing nearer the time. We may be in Sheffield again- two trips planned for near future.

After the crappy Morrison's lasagne sheets sticking and having to cook a few more - (I salvaged the cooked bits of the lasagne - yes all of the sheets decided to stick in the middle - the ends of the sheets were getting overcooked so I made the executive decision to waste the middldes rather than wait for a complete disaster to happen . Only needed a few more sheets to add to the off cut salvage pasta.) made a med and small lasagne - we ate the small which was full to the brim the medium one is not brimming so about equal.  One for either tomorrow or the freezer - I think frozen as I have left over cheese salad to have with baked potatoes tomorrow.

I am shattered- weeny girl though she snoozed in the car on the way back from Rothbury ( That's where Cragside is and yes its also where the mad gunman was last year) - is snoring loudly and doubly shattered!  Day off tomorrow to spend with weeny girl before full time service resumes - Ha just my luck to be part time in the winter but not during the great weather!!! sigh!!!!