ha ha washout!!! Arrived in lovely sunshine - enjoyed one evening partaking of alcohol a wee bit in the family room - beer with child is a novelty!! It was empty and as such acceptable. As a child I had a lot of experience in these type of places - it was the 70's/80's and the holiday bar for families was not unfamiliar to me!!!  By the morning I had a stomach bug and had s & d. Looked outside and in the driving rain Biggles had to change his back tyre which was flat. We had left Weeny girls waterproof so while he set off to find a kwik fit we went on a hunt for a waterproof!! No where - matalan, asda, sports direct, sainsburys - stocked a basic cheap kiddies water proof. She scored for an umbrella instead  - princesses- sigh.  We saw mum, met family for some food in Loans ( a village) - a compliment of thirteen of us - 6 adults and 7 kids - . I ordered food in Loans ( a village) - potato and leek soup was excellent as was the veggie pasta dish. I managed to only eat half the soup and a third of the pasta. Would go back there however. Biggles really enjoyed his - Chicken tempura and  posh veggies. Prices good too 8.95 for two courses 10.95 for three. Food excellent for price. After that we headed back to the caravan. We had horizontal rain and I felt like rubbish still. Doctor Who and other crap tv - no more alcohol!!!

Sunday we had the wee party for the birthday girl. We had cake, sang happy birthday, pressies, tea etc - the kids were really good. Mum seemed to get something out of it- smiled and had a twinkle in her eye for a bit. we all had a general catch up to which was funny. Will be going back in July.  Mum seems well cared for and the home is nice. My cousins call in regularly and keep the staff on their toes. They really care about mum which is lovely. As niece's they had a bettter relationship with her than I did as her daughter.

We made it to the Electric Brae which is an optical illusion - hill where your car will appear to be rolling up hill, Dunure and to the park.

On Monday we took the long route home in the hooligan winds through Moffat, St Mary's Loch, Selkirk and Kelso. Stopped by Grey Mares Tail waterfall  for a stretch of the legs and the cafe at the Loch. Never seen the Loch so full.  All the rivers were rather full. Gales a howling- reports of trees down and cars squished. 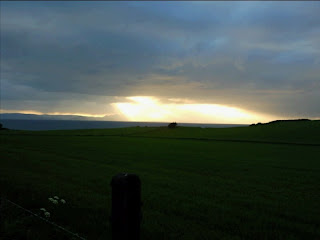 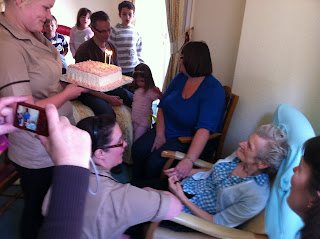 Lucky mum got two cakes one from the staff and one from us and two lots of happy birthday sung to her which she responded to really well- residents got lots of cake that day!!! 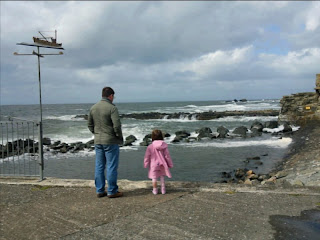 I often only ever get this view of them - will show you what I mean one day!! 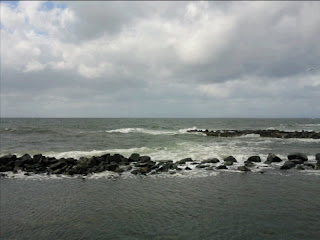 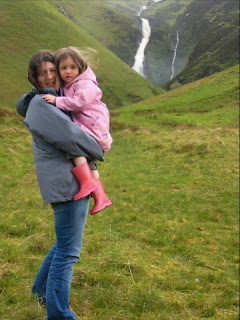